When constructing a game at home in a garage, the style of artwork used is not often a priority - the physical creation and development comes first. However, the single most effective draw a game has to bring players in is the backglass, playfield and cabinet artwork.

Until the early 1990's, the only process used in creating playfield art was screenprinting. Even today, most playfields are screenprinted, including Stern, which uses a four-color process method with added Spot Color on the Limited Edition games.

Screenprinting involves pushing ink through a specially-prepared screen unto a surface - virtually any surface, making it ideal for playfields as it can be done on slightly irregular surfaces, or on non-flexible surfaces.

The basic process is as follows:

Colors are applied one at a time, generally from lightest color to darkest, with a Black Keyline done last to trap all the colors together in a solid shape with no spaces between them. 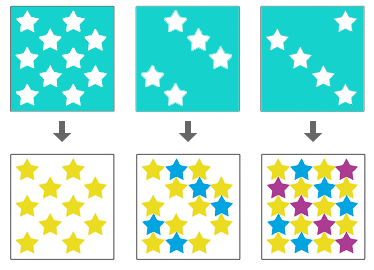 An Eight Ball Deluxe playfield without the black keyline added yet. Based on original films, the lines are rough because 30 years ago, the films were cut by hand! Once printed, the artwork will look crisp and all colors will be properly trapped. 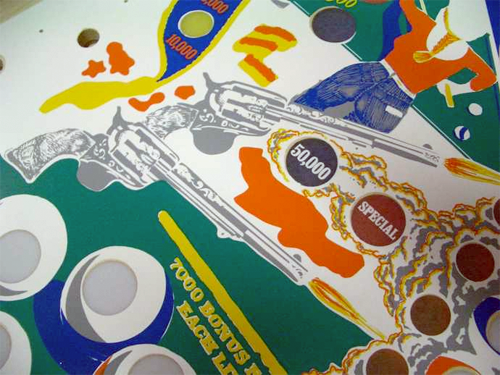 Here is an example of a Funhouse playfield that has a black keyline, but also shows a printing error - the black doesn't cover enough to offset the error in the red layer positioning, thus not trapping the red. This is most obvious in the top left. Sometimes these will make it into final production games!

Screenprinting also allows the use of specialty inks such as fluorescent, metallic or UV-reactive inks, which are not possible with four color process printing from digital printers or inkjet.

Below are some playfields with special inks - Attack From Mars using fluorescent green, TRON:LE with silver metallic and Viper: Night Driving with UV-reactive ink under blacklight.

The drawback for screenprinting is that it requires a lot of specialty equipment, materials and semi-toxic inks to do playfield printing, which will likely be beyond the average garage builder.

In the 80's, Gottlieb started doing photo-realistic backglass art to differentiate themselves from other manufacturers. This process was done using Offset Printing but today can be done digitally with equipment available to the garage builder, or from specialty print shops such as sign printers. 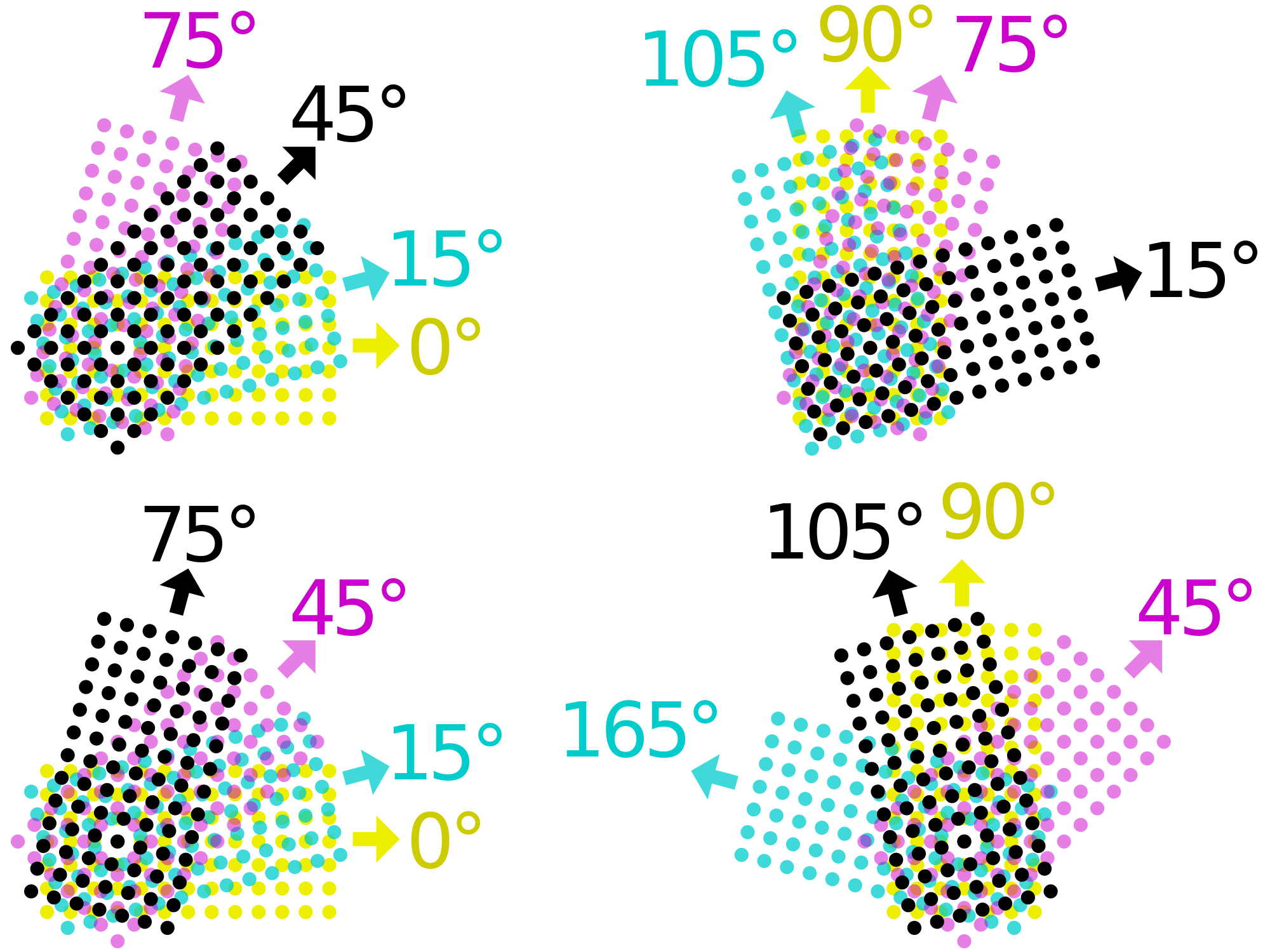 These colors are printed at angles from each other to reduce wave patterns, known as Moiré. When the dots are small enough, the human eye can't distinguish them and blends them together, making the image appear solid.

Here is a close-up of a Stern Lord of the Rings showing the four color process dots: 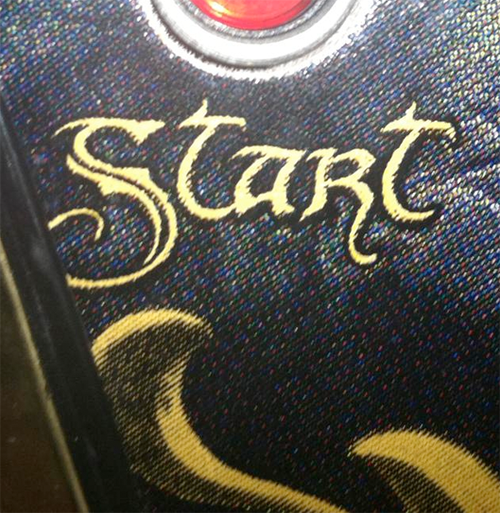 This is how the majority of printing is done today. It can be done with Direct Printing whereby a printer will apply ink directly to the surface of the playfield or cabinet, or though Overlay printing, where the image is applied to white vinyl (typically 3mm reflective white or clear for playfields) and then the overlay is applied to the cabinet. Direct printing gives superior results but also requires a printer large enough to print large sizes, which is expensive.

The drawback to this process is that the colors can be muted due to the additive effect of the inks to dull colors, and you cannot print any specialty colors without adding additional inks in the process.

However, for the majority of home builders, digital printing provides the best cost / benefit option available.

Once the style of artwork has been decided, it is time to design it.

If choosing between Vector or Raster (pixel) art, Vector offers the best quality as it scales without loss of resolution and allows more control over colors, or image correcting, if necessary.

If working with raster images, like in Photoshop, all artwork should be a minimum of 300dpi, with 1200dpi preferred. This allows for highly detailed printing and is especially important for large-scale printing like playfields or cabinets. Most web images are relatively small and usually only 72dpi which prints very poorly. dpi is short for Dots Per Inch - the more you have, the better quality your final print. 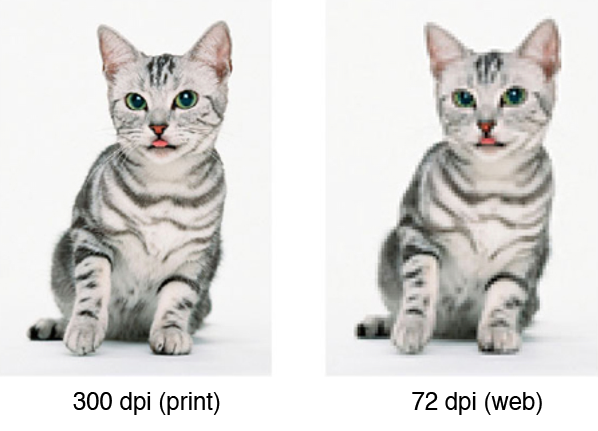 If re-theming an existing game, or there is a desire to include artwork from non-digital sources, scanning artwork will be required. The best option for pinball use is the HP 4670, which is a see-through scanner allowing easy positioning of the unit. 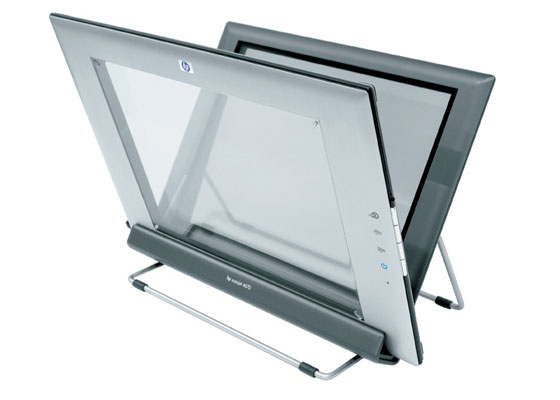 Unfortunately the unit is discontinued, but many hobbyists find them on eBay new-in-box and the drivers work under Windows 8. 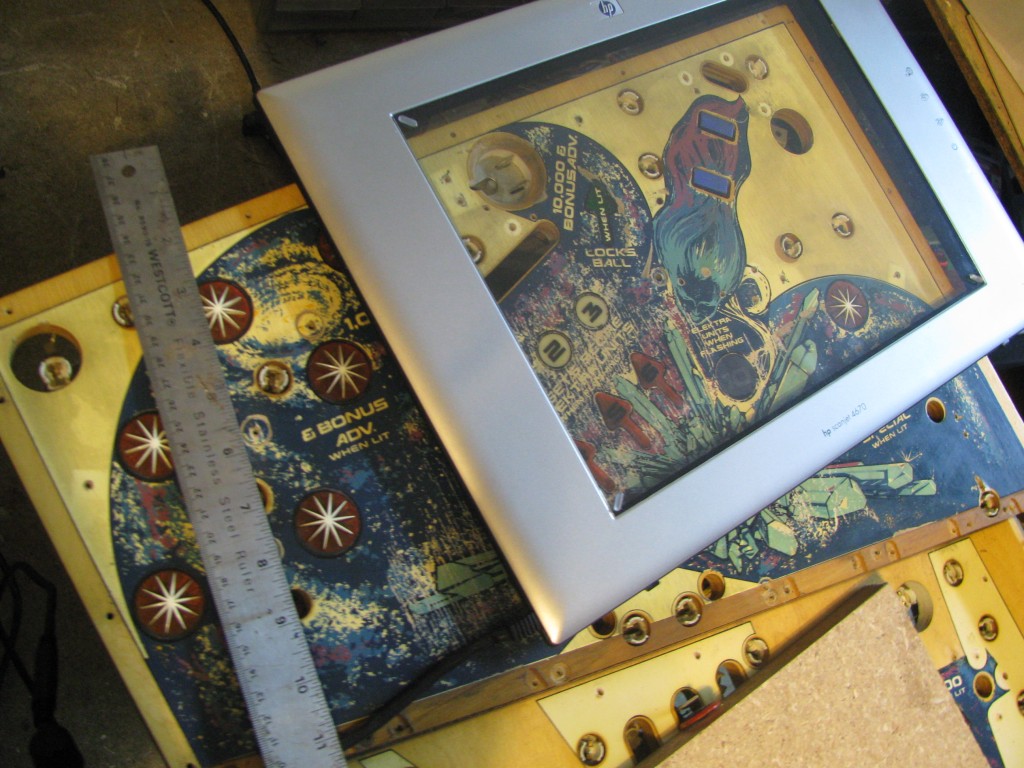 The scans can be stitched together to make a large format drawing to work from. 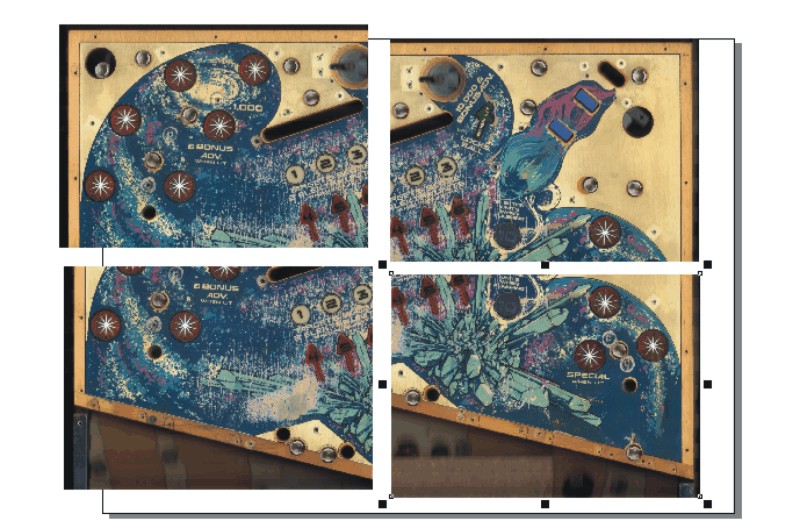 All commercial playfields are direct printed, generally using the screenprinting method. This is a shot from the Churchill company printing room where almost all modern playfields are produced, showing their manual one-arm press:

For garage builders, printing on vinyl or mylar with an adhesive applied is recommended. Either the insert locations are trimmed away, or the artwork is printed on clear media with the insert artwork already included.

Finding a shop that can print white on clear media is sometimes a challenge but most large cities will have sign printing shops equipped to do this type of printing.

From EMs and carried over to the solid state era, scores were embedded within the art. Some areas are clear for the displays, and some are white and unmasked, allowing light through - such as "Extra Ball" or "Game Over". If doing a re-theme of an older game or a retro-styled game with score displays, most games employed a silvered Block out layer on the backglass to prevent light from coming through, unlike modern games which are fully lit.

Towards the mid-80's, the numeric scoring was moved down between the speakers, which eventually became alphanumeric, and then DMD. By this point, the backglass was purely decoration and any game status indicators were moved to the display. 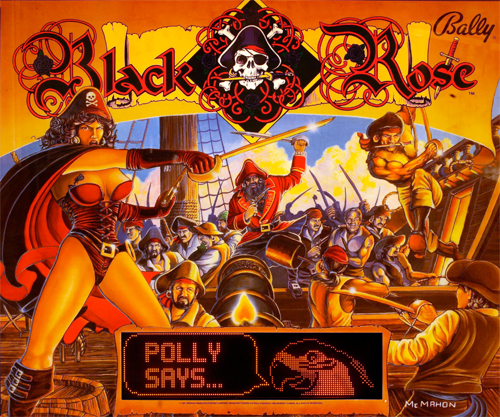 Separating the scoring from the art simplifies the artwork design - the artist does not need to handle the careful placement of elements around the score displays or account for infomation display positions. Usually the name of the game is included somewhere in the artwork, but not always - games like Whitewater and The Addams Family have backglasses with just artwork and rely on a topper to communicate the game's name. 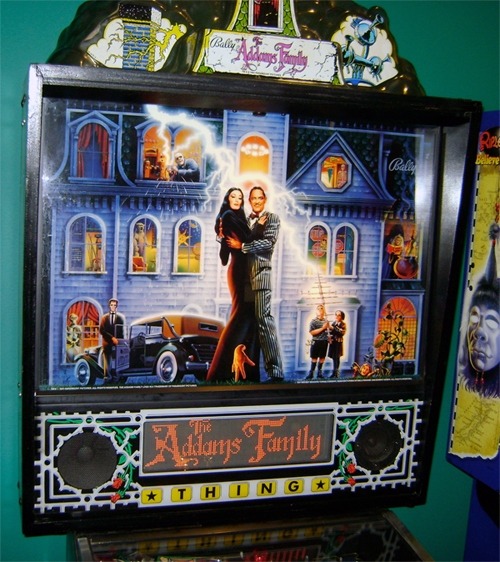 Many older backglasses include a mirror layer that provides a unique visual effect. This process involved Etching a mirrored glass to remove the mirroring in spots, then printing the glass normally. Unfortunately, this technique is highly toxic and the chemicals involved are difficult to find.

Using Mirror Effect paint on the backside of glass can replicate the mirror effect close enough for most people. Simply create a template similar to how you would for a cabinet, apply it to the glass, and spray according to the instructions on the can. 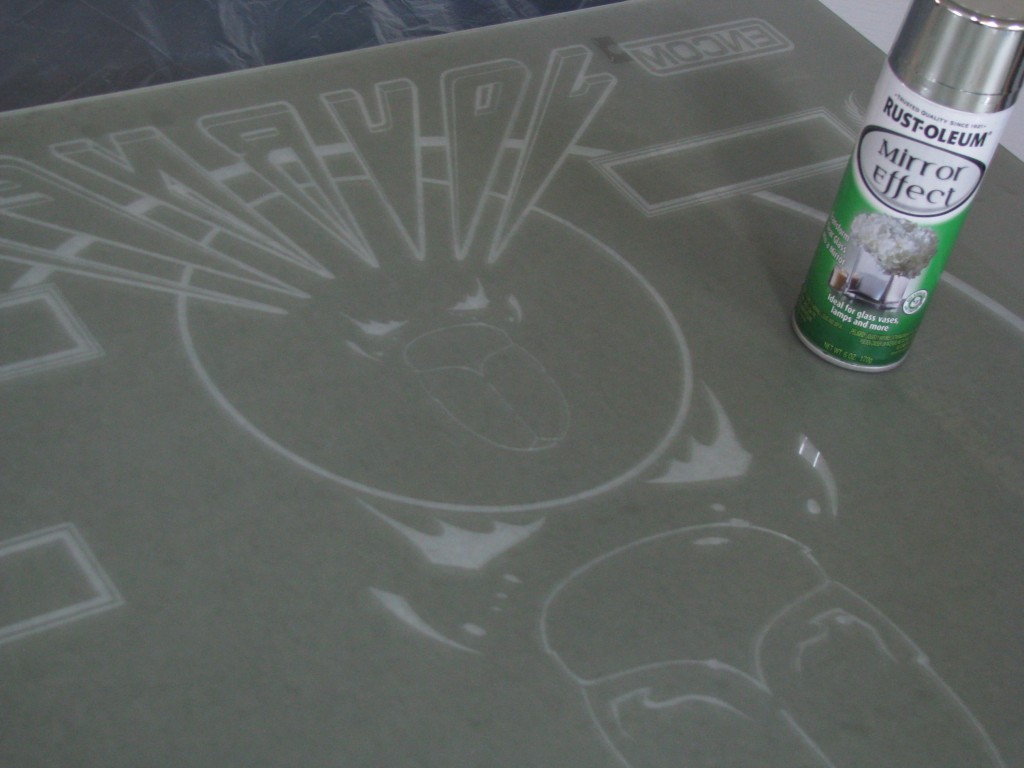 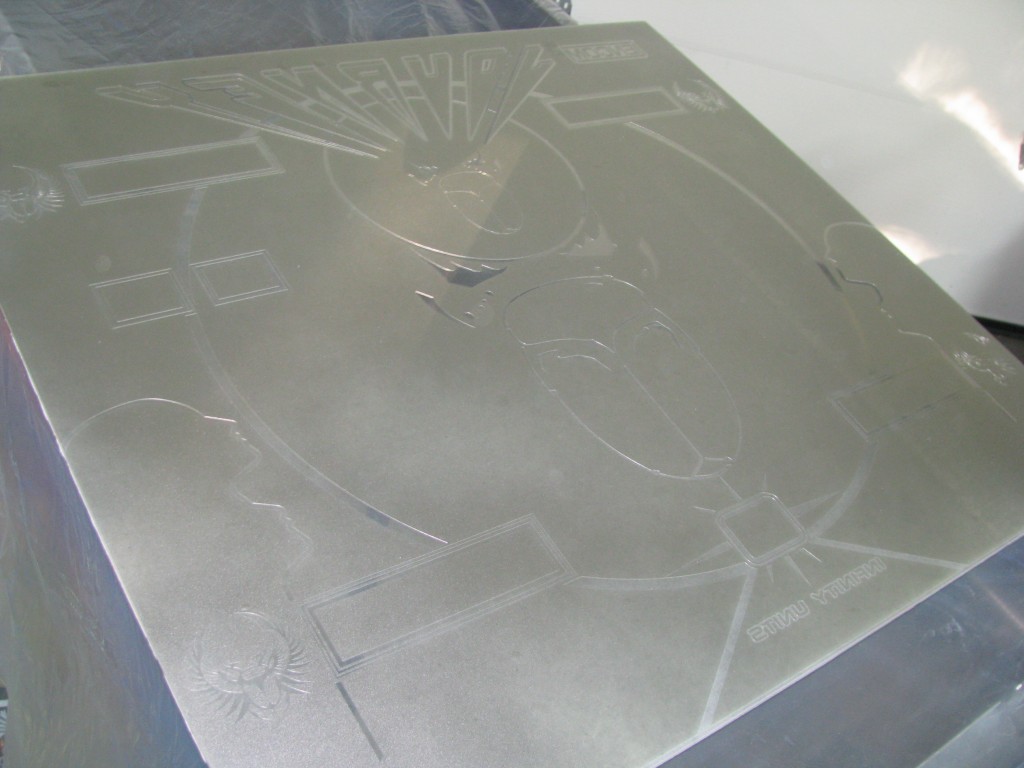 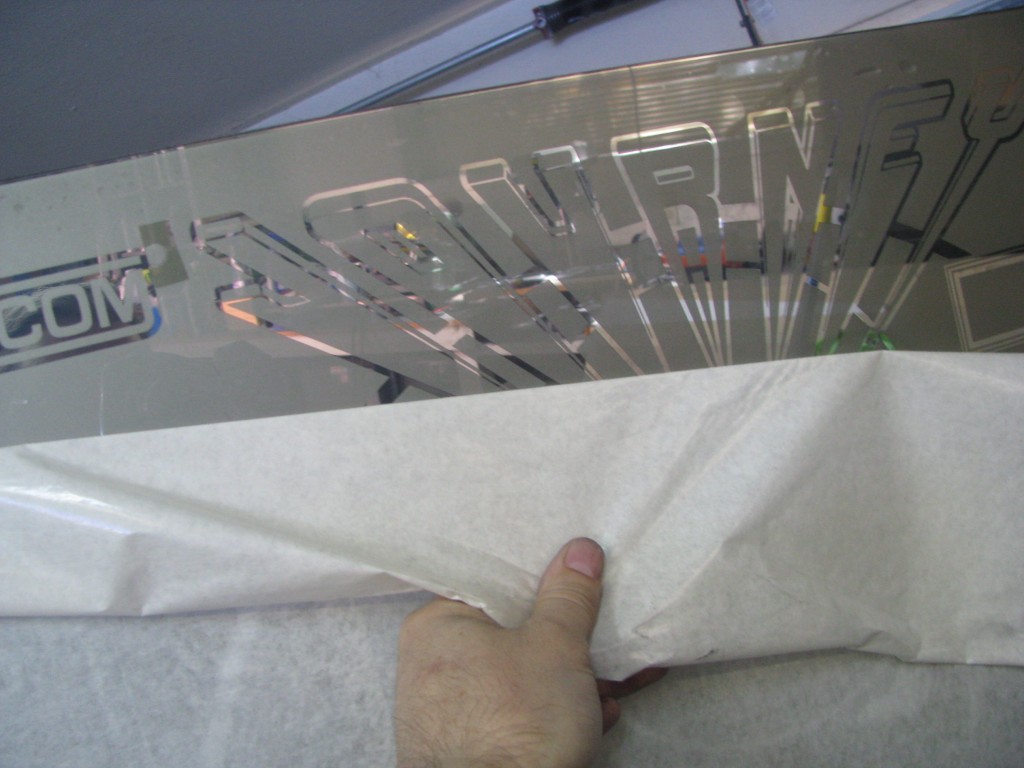 If using direct printing or decal for the rest of the backglass, the mirror effect can be done last after printing, which should leave blank areas, or applying the decal with the areas to mirror cut out and using a stencil on top of that to position the mirror effect.

Typically the cabinet will have the name of the machine, often as a logo. Sometimes the art is printed with a plain background, or sometimes the entire cabinet is filled with art. Like playfields, the cabinet can be direct printed or done with an overlay. Stern has been doing overlay for many years now because they can get brighter colors when compared to direct printing.

Originally, cabinets were printed using Stencils. The cabinets were printed in stages, with each stencil masking the previous layer, similar to screenprinted but done with spraypaint instead of ink through a screen. Commercial machines were done using cut metal stencils which were laid on the cabinets and spray painted. The metal stencil would not always lay perfectly flat, resulting in sometimes blurry edges on the artwork.

However, this process is particularly easy for the garage builder to emulate using paper or mylar sheets, and does present a very striking image. Some of the things a stencil is useful to do include: 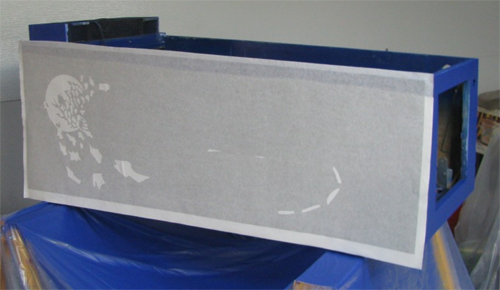 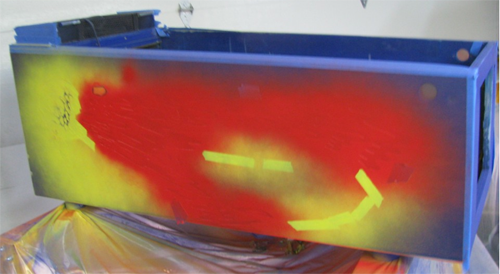 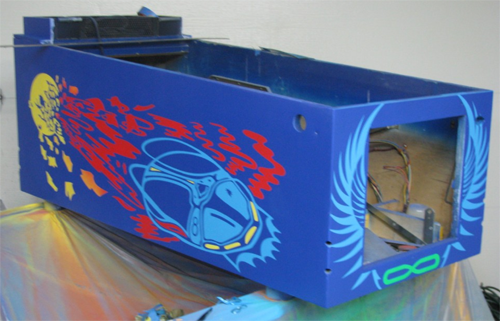 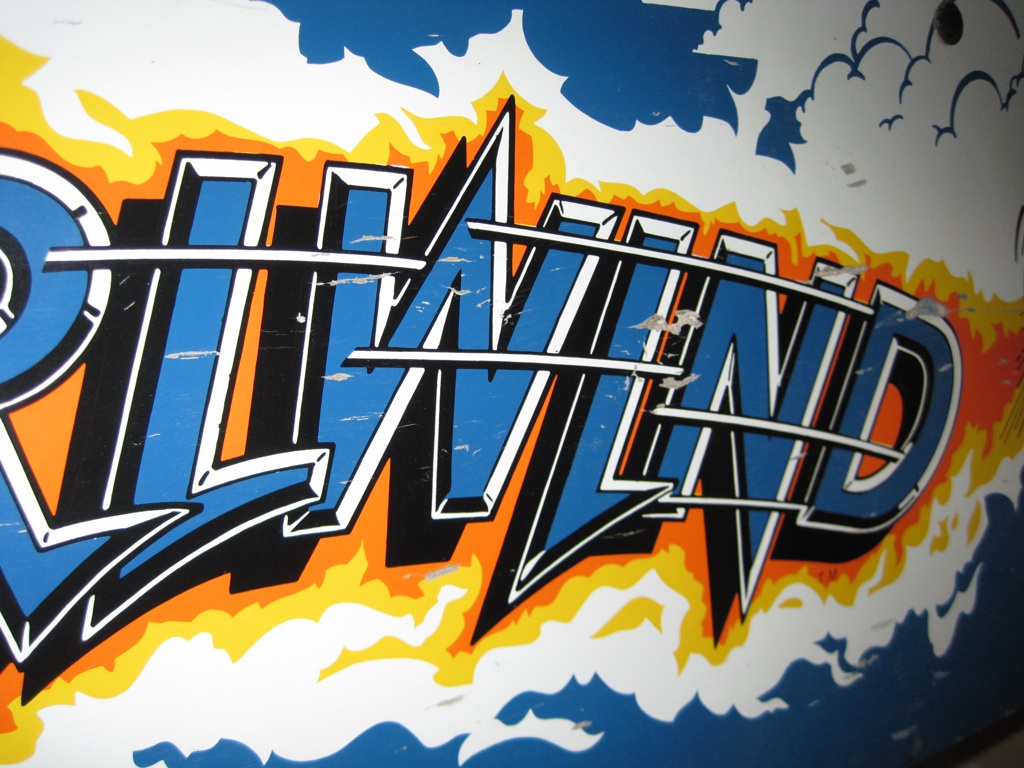 Finally, most companies today will do direct printing or overlays which are attached to the cabinet wood, and is the best choice for the garage builder as it can be produced by most sign shops or even on a home printer. 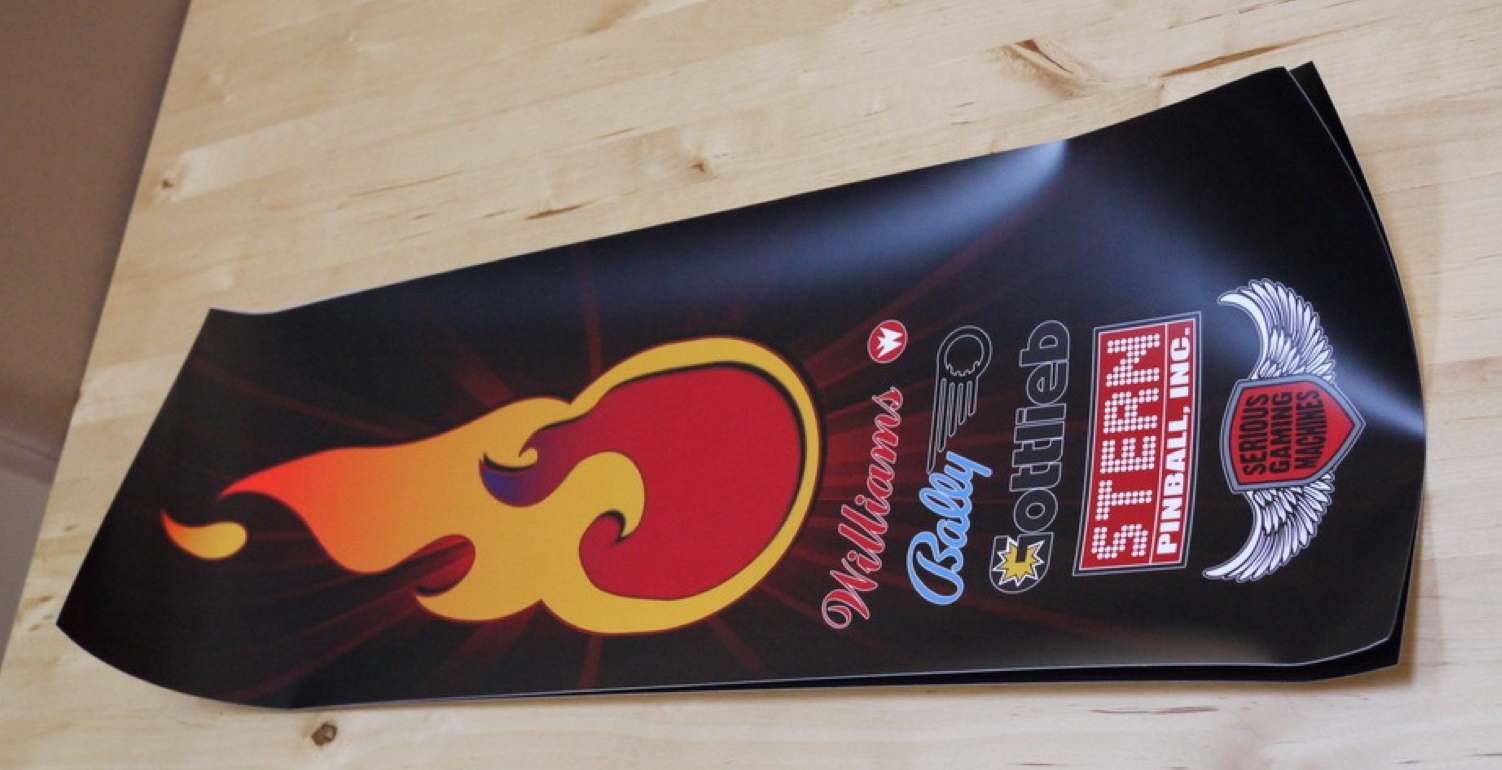 The techniques for backglass and cabinet are similar if not exactly the same for playfields, except that the playfield artwork must take the positions of all the playfield devices into mind when designing. The best option is to import your playfield drawings into your graphics program and draw from that reference as the lowest layer.

It is important to note the difference between White and Transparent - if planning to print on a clear surface, or do direct printing, any area that is an insert, or a hole for a device, is clear, while artwork can be white. Many beginner artists are used to working with white paper as the base instead of a clear medium. All commercial quality drawing programs will allow for transparency.

If doing an overlay, applying it can be very nerve-wracking as careful positioning is critical.

Check the printed overlay for general fit before starting. There is no point in applying an overlay that is not the correct size, has flaws or mistakes in the artwork. 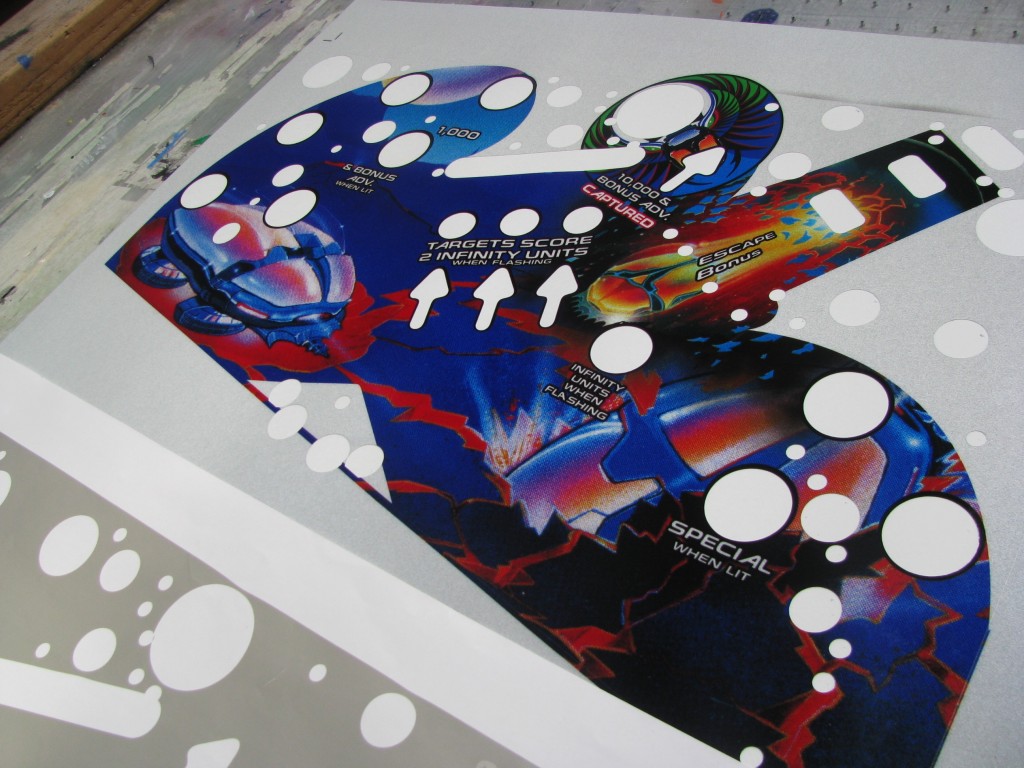 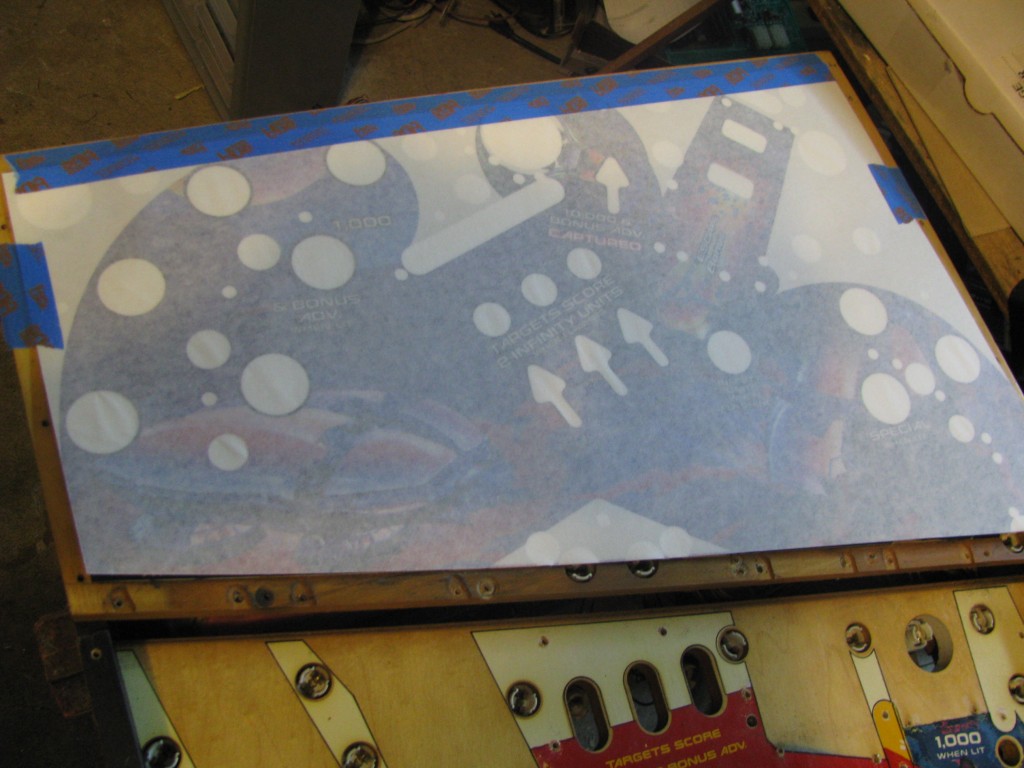 Once positioned, spray the surface of the playfield with some windex to allow re-positioning and movement of the overlay, and begin peeling the backing off and attaching the overlay. Move in 1" increments, using a small squeegee to remove any trapped air bubbles.

When finished, remove any protective coverings and check final fit for air bubbles. If they are small, they can pricked with a pin to release the air and squeegeed down. 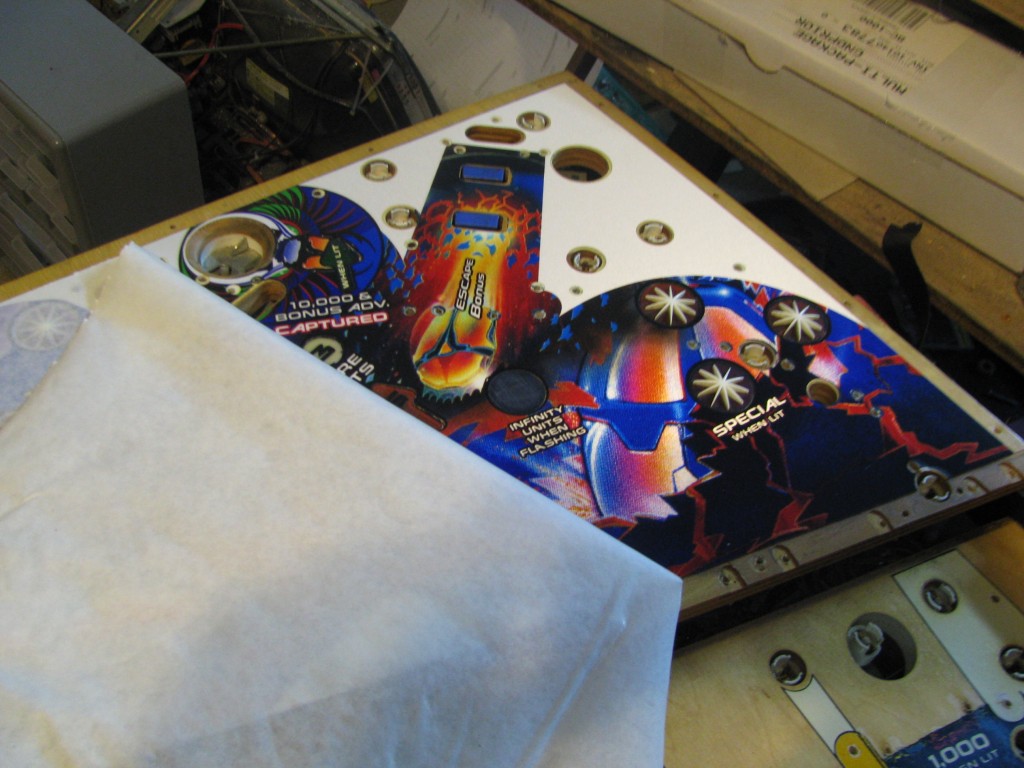 If doing direct printing or an overlay, the artwork can be protected without having to resort to spraying a layer of clear paint over it and risking chemical reactions by having a .010/10mil polycarbonate sheet on top that corresponds to the shape of the playfield and various devices. It should provide a highly durable surface that maintains shine, and is easily replaceable in the future.

Use the playfield CAD drawing to create the cut template.