Before anything else, you need to have a design you want to build.

Users of this site are assumed to have a basic understanding of what a pinball machine is and of the basic operation and maintenance of them, but for the purposes of designing one, a pinball machine generally consists of at least a minimum of a flat surface (generally plywood) for a steel ball to roll on, passive devices that interact with the ball such as switches or rubbers, machine-controlled devices that interact with the ball such as pop bumpers or kickers, and user-controlled devices to direct the ball, such as flippers.

Pinball machines are complex constructions, requiring a diverse set of skills to complete. Some of the basics include:

It's important to remember this list when planning out the roadmap to not get stuck half way through - be prepared and willing to leverage the wider maker community when skills fall short.

The sky is the limit in terms of ideas and creativity. There are no rules that say you must use the "Two Flippers with In-lanes" standard that has been the convention since the 1960's. As a starting point, there are some standard layouts you can work from.

If you need some inspiration, the modern machine layouts fall into two categories: Flow and Stop-and-Go.

For a game to be described as a Flow machine, the amount of time the ball is fully stopped without player interaction is kept at a bare minimum. This means outer loops that bring the ball back to the flippers quickly, allowing for looping, continuous shots.

An example of this type of game would be Attack From Mars, a machine produced by WMS: 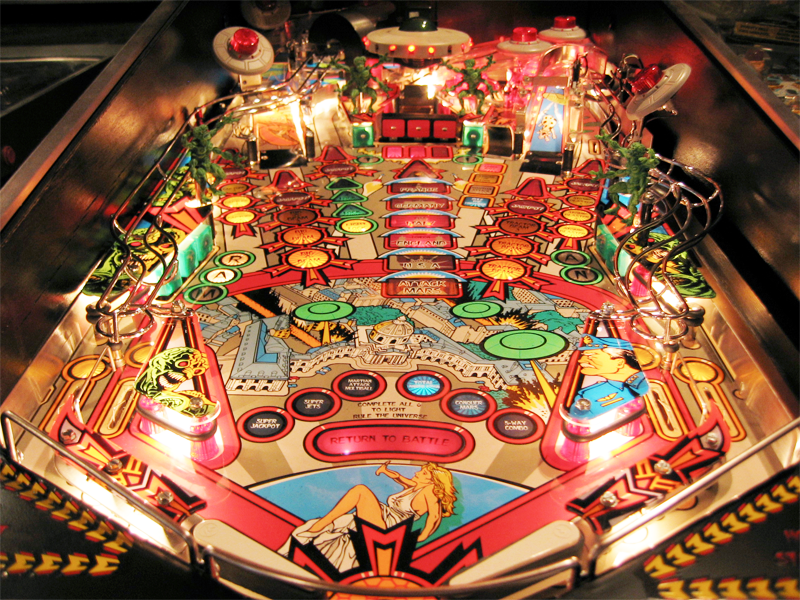 The game uses a Fan layout where all shots are direct lines from the flippers that mostly loop back to the flippers, allowing for quick and continuous ball action.

For Stop and Go games, flipper shots can loop back to the flippers but many of the shots will involve scoops, ball traps and other devices that interrupt the flow of the ball, or cause delayed re-directions based on game rules.

An example of this type of game would be Twilight Zone, a 1993 machine also produced by WMS: 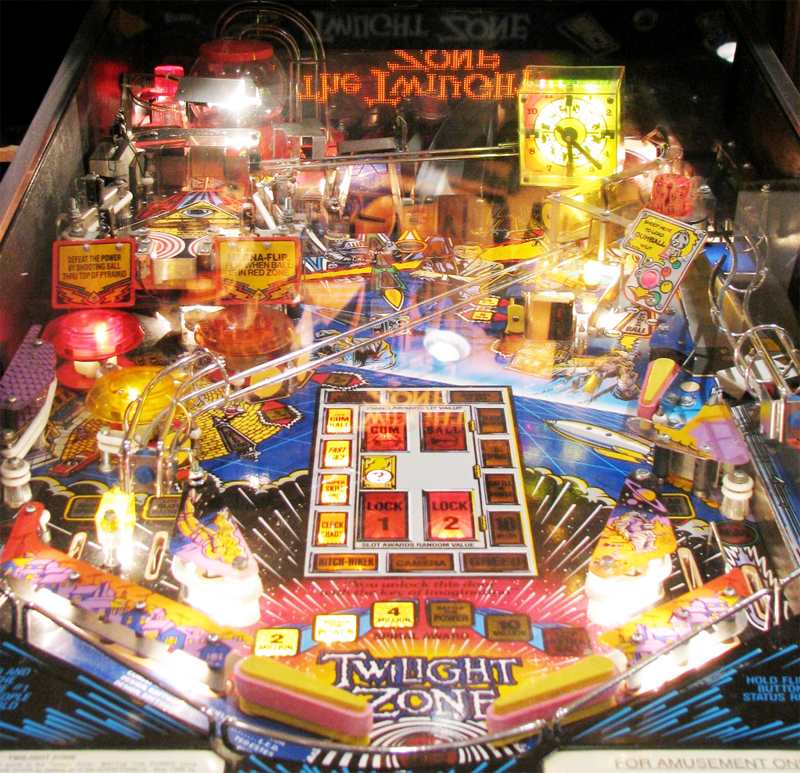 In this game, the majority of shots result in a ball stop or re-direction to a path not directly in line with the flippers.

It is up to the designer which style of pinball play they prefer when designing your game, and generally every designer has their own styles that are recognizable to regular players.

All pinball machines have a theme to help differentiate one machine from other machines or to attract players. Whether it is an original theme or based on an existing property, the theme you choose should help to inform the design of the game itself in some manner.

For a game to be used exclusively in a home, as most custom games will be, makers are free to choose whatever theme they find most appealing. If the game is intended for possible production for others, using an original theme is suggested to avoid any copyright or licensing issues.

The important thing to remember when creating a pinball machine is that there are a number of key limitations that have to be understood and incorporated into a design to allow it to be physically produced.

Gravity only goes down. That means that a ball will only roll downhill unless there is a powered method of moving it otherwise. A designer has to be aware of all the possible ball traps where a ball might be prevented from rolling downwards - an example might be a ramp that drops a ball behind a post, or a ball guide that is not at a steep enough angle to allow the ball to roll without nudging the machine.

An example of a ball hangup, this ball is prevented from rolling by the decorative plastic covering above a hole where it ended up after the ball became airborne: 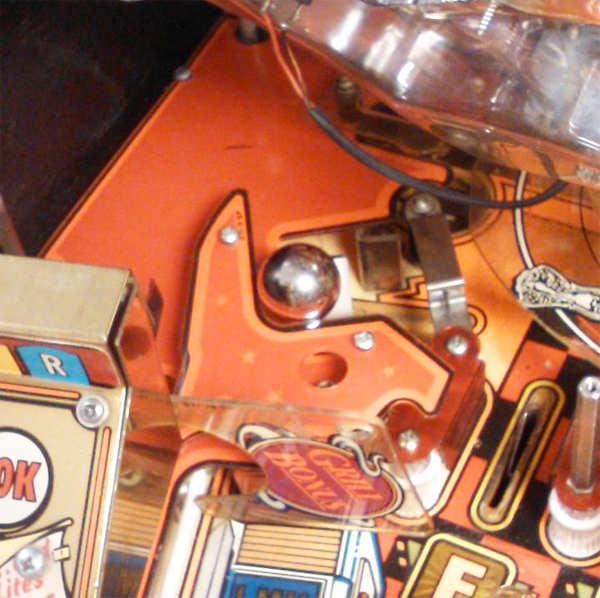 These sort of hangups usually show up in the whitewood stage but can often be predicted and avoided during design stage.

In the US and Canada, a single wall plug is restricted to between 15 - 20amps of rated power at 60hz. However, since plugs typically don't exceed 80% of it's rated power, it's actually limited to between 12A-16A. Most pinballs don't draw more than 4 peak amps at any time, so this is not usually an issue unless you have multiple pinball machines running on the same circuit. This should be considered the maximum available power to a game. Although at first glance it seems absurd that a design might exceed this amount, having multiple high current devices like coils, flash lamps, high power subwoofers and other power-hungry devices can eat up that power quickly. A design should take that into consideration. It is also important to note that 120 input voltage has a plus or minus 5%, so your input can be between 114-126V.

For most WPC games, the holes for the flippers are 1/2" in diameter and the centers are located 7" up from the bottom edge of the playfield, while the flippers are from 6 13/16" to 7" apart from center to center.

A rule of thumb is that the larger the playfield, the slower the game plays as the ball has further to travel between devices. As such, standard sized games will subjectively appear to play faster than widebody games, while a widebody game allows more room for devices and other ball interaction mechanisms.

Ultimately, all the devices need to sit together on the playfield, both above and below, so a design must take that into consideration as well, especially when using existing standard mechanisms from current manufacturers such as flipper mechs or pop bumpers.

For example, here is a CAD drawing of a Williams flipper mechanism. The blue shows the under-playfield section, which is significantly larger than the area used by the flipper itself, which is the only visible part from the player's perspective. 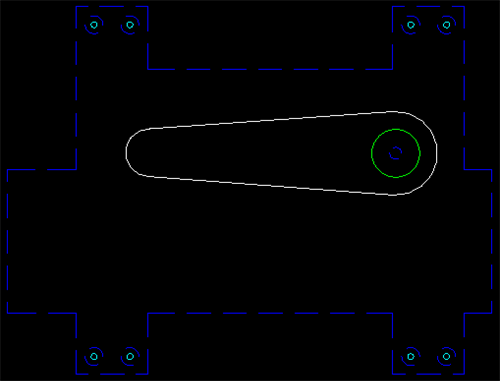 Once the style and theme of a game has been chosen, it is time to begin the actual design process of the playfield. This is the best place to start as all other parts of the overall design of the machine are based on it.

Some designers come from the virtual pinball world, having created virtual pinball machines and are now considering making it a physical reality. The two best examples are Visual Pinball and Future Pinball. 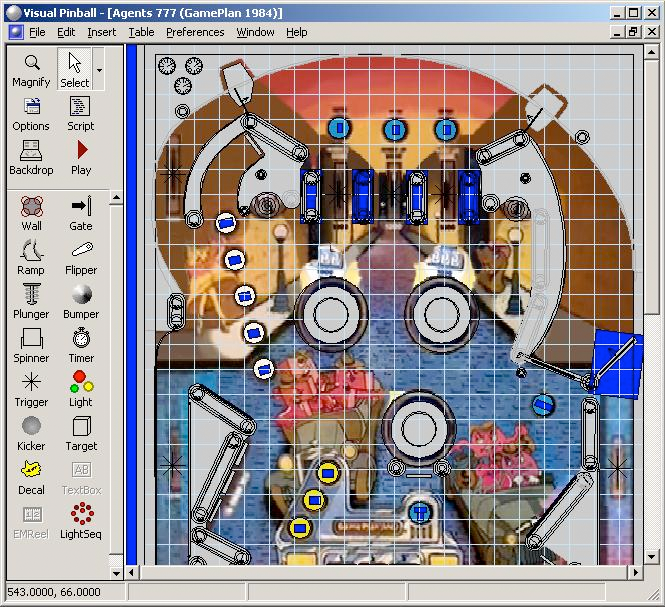 If you are using the P-ROC controller, users have made it possible to use a combination of Visual Pinball and PinMAME integrated with the pyprocgame module to allow virtual development of a game. Details are available in the P-ROC Forums.

However, transitioning a design from Visual Pinball to a format understood by CAD programs can be problematic and time-consuming. Additionally, the software only works on Windows machines and does not work well under emulation on Apple machines.

CAD stands for Computer Aided Design and has been the professional method of producing playfield designs since the 1980s.

Previously only available to professionals due to the high cost of the software, a number of free alternatives are now available to the hobbyist.

Drawing with Vectors involves manipulating splines and curves instead of bits to create drawings, which allows infinite resizing and editing. For those who find the interface and options of a dedicated CAD program daunting, using a Vector drawing program is a viable option.