Connecting switches to the P-ROC

The P-ROC has support for the following dedicated and matrixed switch configurations:

Dedicated opto switches consist of an IR transmitter and a IR phototransistor (receiver). The transmitter gets connected directly to power through a current limiting resistor (resistor value depends on the power level and the specific type of IR transmitter you use) so that it always transmits. The phototransistor works similarly to a mechanical switch except reversed. The circuit is pulled high on the P-ROC when not enough light is detected by the phototransistor (ie. when a ball is blocking the light) and driven low when the light is not blocked. 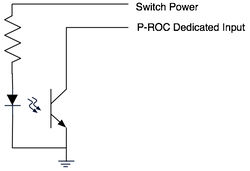 The P-ROC supports switch matrixes up to 8x16. When in use, the matrix functionality automatically scans the matrix, capturing switch events on each switch in the matrix as they occur.

When the P-ROC is scanning the matrix, it will drive each matrix output low, one at a time, while capturing the states on each of the inputs. By iterating through each output, it can capture the states of each and every switch on the matrix in a very short amount of time, configurable down to 1 millisecond.

All switches on your matrix need to have a 1N4004 or equivalent diode in series with the switch. It doesn't matter which side of the switch the diode is on. Just make sure to orient the diode so the bar end points towards the P-ROC matrix output.

Unlike mechanical switches, which can be used on a matrix input in the same fashion as a dedicated input (with the addition of a diode), opto switches require some more circuitry. There are a few reasons for this, but the primary reason is that opto circuits are constantly active. In other words, the IR transmitter is constantly sending light, and the phototransistor is constantly trying to detect light. This means the output of the phototransistor is always active. Therefore, if it shares a P-ROC matrix input with other switches, it will corrupt the detected states of the other switches.

Instead of wiring all of these comparator circuits for each and every opto you want to use on the switch matrix, it would be much simpler to use an existing opto board. A common opto board used in many existing pinball machines for the exact same purpose is: